Epsilon Delta Chapter (Founded 28 April 2003) is located at the University of South Florida in sunny Tampa, Florida. The Chapter is a member of the Southeast Region. 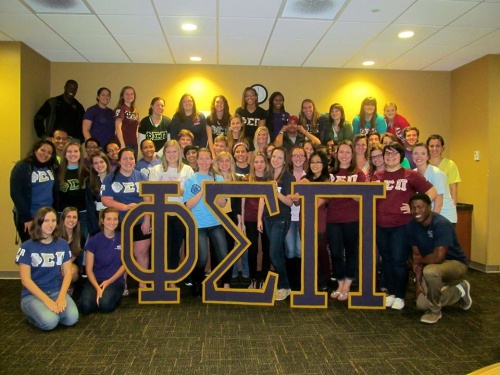 Being from a university that values a strong global population, Epsilon Delta reflects a similar diversity in its Brotherhood. We have a number of nationalities represented (Venezuelan, Swedish, and Haitian to name a few), as well as a wide cross-section of majors. Many Brothers work together on homework assignments, take courses together, trade textbooks, and offer academic resources to younger students. With alumni participating in USF's pharmacy and graduate schools, we have a tight-knit community of great Brothers throughout the USF system.

The Epsilon Delta Chapter participates in various activities and events at USF and in the community. We participate in well-known campus-wide service activities such as Community Plunge and Gandhi Day of Service in the Fall and Stampede of Service in the Spring. One of our most beloved projects is our participation in Relay for Life. Epsilon Delta participates yearly and is well known for being the "most spirited team." Phi Sigma Pi also plays an active role in USF's intramurals, from football to bowling, participating in at least half a dozen each year.

Epsilon Delta was founded in 2003 after Nationals came to USF looking to begin a new Chapter. The Chapter struggled to build momentum and settle confusion its first few semesters but was aided by our Brothers at Gamma Chi Chapter. We inducted 78 charter members, led by president Jennifer Mathis. Their meetings started out haphazard and crowded in the Marshall Center breezeway, but are now well conducted under Robert's Rules and are constantly striving toward efficiency.

Our original Executive Board was comprised of:


At first, the Chapter required attendance at 3 social, 3 fundraising, 3 service and 3 scholarship events in addition to rituals and voting each semester. However, Epsilon Delta is now on a points system that promotes attendance at all events, regardless of size, and has effectively boosted attendance at both required and miscellaneous events.

There are usually between 50 and 60 active Epsilon Delta Brothers each semester.

EDD is the official mascot of Epsilon Delta. This handsome Dinosnore can be found repping his letters at various fraternal events. 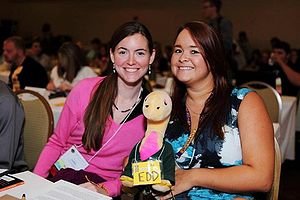 Epsilon Delta holds a banquet every year in honor of Founder's Day the weekend around the exact date. Alumni are always welcomed and we have a blast. During this banquet, numerous awards are presented. Here are the main awards:

Brother who most exemplifies the tripod

Brother who most contributes to the Fraternity with little recognition

Committee Chair who has gone above and beyond in their events

Epsilon Delta hosts its annual ICR event during the Gasparilla Pirate Invasion, which takes place on the Tampa Bay each spring. Epsilon Delta hosts visiting Brothers in historic Ybor City for a weekend of parades and pirates. Gasparilla became our official ICR event in 2008 thanks to ICR chair Christine Vazquez and continues to feature visits from Brothers from throughout Florida and its neighboring states.

Epsilon Delta started a Parents' Weekend in Fall 2007. During this weekend, the parents of the active Chapter were invited to come and learn about the great organization their son or daughter is so involved in. We put this event in the Fall to bring parents to either watch a football game in Fall 2007 or tailgate and attend a game such as in Fall 2008. There is always a large turnout and parents get to meet the people their son or daughter always talk about or spend so much time with.

Alumna member and former President Casey Moore started a Brotherhood Retreat in Spring of 2006 at Day Springs. The Retreat includes: icebreakers, discussion of the state of the Chapter, Goals, paper bags for each Brother that gets filled with positive notes, a bonfire with s'mores, and canoeing. Recently, Brotherhood Retreat has been held at Lake Louisa State Park where Brothers gather for fun activities and team-building. The Chapter has begun having "serious talks", a phrase coined by former President Jerica Singleton, during which Brothers are given the floor to talk on a number of topics related to their goals for the Chapter and themselves.

Relay for Life is very near and dear to the Epsilon Delta Chapter. In Fall 2008, we lost an alumna to Osteosarcoma. Darcy Enrille was a beloved member of Beta Class and a dedicated Brother. She would use Relay to help spread her message of her cancer and we can only keep doing the same. Epsilon Delta raises over $1,000 in Relay. This is always a large turnout and brings the Chapter closer together. In Spring 2009, we dedicated our entire weekend to walking in her memory. The Chapter has won "Most Spirited Organization" at Relay for Life in 2009, 2010, 2011, and 2012.