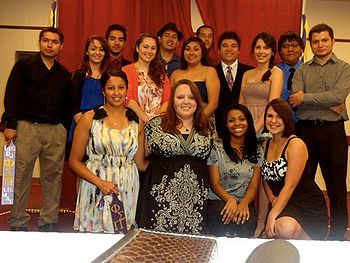 On December 2, 1999, the Delta Iota Chapter at the New Mexico State University was founded by Graduate student Andrea Folcik with an initial Founding Class of 34.

With a colonization of 35 members, things looked very bright for Delta Iota Chapter. However, matters proved to not be as simple as they seemed. There was much confusion as to how things should be done and the direction the chapter wanted to go. Many members did not feel a closeness or brotherhood and felt more like 'members' of an organization, rather than Brothers in a fraternity. Even though there were 35 members, they managed to recruit only one new brother in the Spring of 2000. The following Fall was not fare any better with only one new member being inducted into the Chapter. There began a mass exodus as about 20 of the initial 35 ended up leaving the brotherhood. Spring 2001 and Fall 2001 saw no new brothers. Things were looking very grim for the chapter, however two very key members would ensure its survival.

Two active members, Elizabeth "Beth" Johnson (President) and Luke Shiver (Vice President) came up with the idea of a bulk letters and emails to select New Mexico State University students who met the fraternal requirements. That would result in a dramatic turnaround that lead to the recruitment and induction of 20 new quality brothers in the Chapter. Delta Iota had finally grown, turned itself around, and become a stronger chapter. Many who were inducted became Executive Board members immediately and began shaping our future. One year later, Luke Shiver was elected President, promoted the ideals of continuing strong recruitment in the never ending search of quality members. Membership grew yet again and Lisa Ambrosia (Phi Sigma Pi National Consultant) came to Delta Iota who helped organize and instruct the Chapter on fraternal expectations. As many of the Executive Board members from the initial recruitment in Spring 2002 grew with the fraternity, as did the Delta Iota Chapter, which resulted in laying a strong foundations for many years to come. In the fall of 2004, the Delta Iota Chapter inducted its first Honorary Brother, Phillip McNamara. It was a big deal for the Chapter as he was the first and as such much research was done making sure everything was done correctly.

During the 2005-2006 school year the Delta Iota chapter was confronted with unexpected problems. Internal conflicts within the Chapter divided the chapter and as a result many Brothers went inactive for the semester. The following semester many of those who had gone Inactive for the fall semester decided not to return to Phi Sigma Pi. With graduating seniors and the Inactive Brothers permanently leaving the fraternity the Delta Iota Chapter was down to 12 brothers. The Recruitment for the following semester was very difficult as there were only 2 potential new members, both of whom ended up dropping the initiate program, leaving Delta Iota with no new brothers for Spring 2006. Following the Spring 2006 graduation, the chapter was down to nine members with many internal problems still unresolved. Things were looking very bleak for the Delta Iota chapter going into the next school year.

Over the summer and at the beginning of the Fall semester, the chapter knew it had a lot of work to do in order to re-vitalize the chapter. Through much dedication and hard work, the Chapter had a strong Recruitment class and was able to bring the number of Brothers in the Chapter above 15. Since then the chapter and its Brothers have worked very hard semester after semester to ensure that there is not a repeat disaster of 2006. Since then the chapter has grown in size and presences around the University and community thanks in large part to a handful of Brothers including Whitney Acosta, Amanda Villaseñor, Daniel Mendez, Cynthia Mondragon, Andrea Travis, Megan Atencio, Travis D. Gee and Roxanne De Luna just to name a few. Under their leadership and guidance the chapter welcomed 8 new brothers in the fall of 2011 and 2 the following semester doubling the size of the fraternity and bringing the total number of Brothers to 20.

In May 2012 the Delta Iota Chapter saw a mass graduation with seven Brothers graduating and obtaining Alumni Status. However 4 additional Brother left the fraternity either by Resignation or Expulsion. By the start of the fall 2012 semester the chapter was once again down to nine Brothers with most brothers holding multiple positions on both the Executive Board and Executive Council. That semester was very rough for the chapter but under the leadership of Erika Ponce and thanks to the contributions of all Brothers the chapter welcomed seven new brothers into the Delta Iota Family.

President Erika Ponce and another Brother graduated in December 2012 which resulted to a rare midyear election with many newly inducted Brothers taking on chapter positions. For the Spring 2013 semester the Chapter was faced with unforeseen difficulty in relation to the elections but by April 2013 the Chapter welcomed 5 new Brothers. Unfortunately as 2013 progressed internal conflicts continued, leading multiple brothers to become inactive or lose interest due to in-fighting. In the course of 6 months the Delta Iota Chapter saw four resignations and one expulsion, include all but one of the newly inducted Brothers.

The Chapter Today (The Renaissance)

The Chapter brought in 2014 optimistically beginning first with a successful and beneficial visit from the National Consultant. This was then followed by a strong Recruitment Program which brought in nearly 40 prospective members of which 12 individuals began the Initiation Program. Things have been looking up for the Chapter and as of May 4, 2014 the Delta Iota Chapter stands at sixteen (16) Collegiate Brothers and one (1) Honorary Brother, who is also the Chapter Advisor.

In recent years, the size of the Chapter has generally fluctuated between 10 and 25 Brothers each semester. Delta Iota Brothers are very active within Phi Sigma Pi as well as other organizations on-campus, ranging from honor societies to social fraternities/sororities to academic department organizations to College Councils.

The Delta Iota Chapter currently has an eight position Executive Board. Officers are elected each spring to serve the following academic year (August to May). The composition and size of Delta Iota's Executive Board has continually evolved as the Chapter has matured. Unwilling to settle for the status quo, the Chapter has added officer positions and shifted responsibilities to meet new challenges.

Executive Officers elected in May, 2017

Delta Iota carries out multiple events each semester. These activities include but are not limited to: 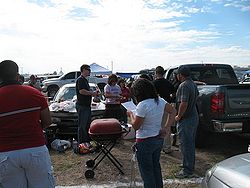 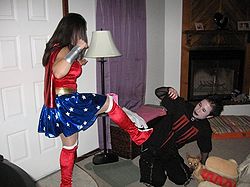 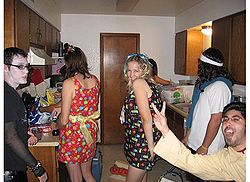 Currently the Delta Iota Chapter has been able to established two distinct family trees: the Johnson Family and the Shiver Family.

Currently a Work in Progress