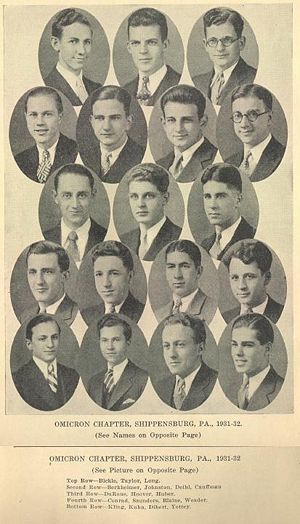 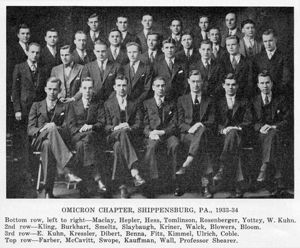 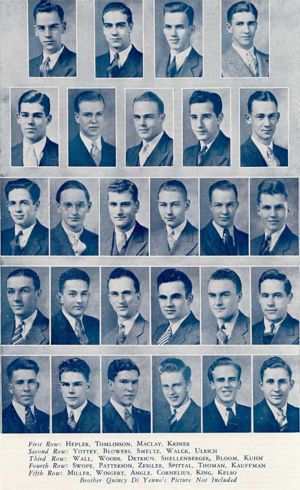 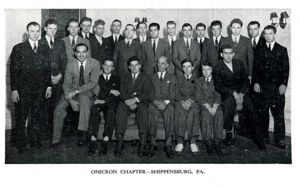 Omicron Chapter (Founded 8 May 1931; Reactivated 1 March 1987) is located at Shippensburg University of Pennsylvania in Shippensburg, Pennsylvania. The Chapter was founded by Chapter alumnus name and is a member of the Central Pennsylvania Region.

At the time of the chapter's founding in 1931, enrollment was approximately four hundred members. In the decade prior to World War II, membership in the chapter averaged between thirty and fifty members.

The guiding force in the establishment of Omicron Chapter was Dr. Simon Shearer. This well-liked professor was the chapter's first advisor and served in that capacity until World War II when the chapter became temporarily inactive.The first charter member of Omicron Chapter was President Lehman, but dies of a heart attack six months after the chartering. Omicron Chapter then inducted its first Honorary Brother, newly-appointed President Rowland, at its first Founder's Day Anniversary Celebration. An annual publication called the Epistolin was produced in the early years. There are currently four buildings on campus named after Brothers.

Activities of the fraternity during these early years were quite varied. One annual event was a picnic/smoker for the members and their dates that was held in cabin owned by Dr. Shearer. They also sponsored speeches by education professionals, held an annual Christmas party, and some members even served as ushers at various events on campus. A Founder's Day banquet was also held each spring on the second floor of Morrison's Restaurant ( now the American Legion in town). Awards were presented yearly to various members for outstanding service to the fraternity.

With the start of World War II and the departure of men to serve in the war and women to take their places in the factories, enrollment at the college dropped off sharply. Enrollment was down, faculty members were released, and the school almost closed down. As a result Phi Sigma Pi, along with most of other campus organizations, was put into mothballs until the end of the war.

During the decade of the 1950s, the fraternity experienced a revival. Under the guidance of advisor Mr. Roy M. Dibert, the fraternity consisted of approximately 25-30 men. The organization was considered the most prestigious on campus and an invitation to join was rarely declined. Meetings were held on a monthly basis, along with other social and academic functions. In 1958, under the presidency of Dr. Donald Morningstar, delegates were sent to National Convention in Kansas where Omicron Chapter won the Outstanding Chapter award.

With the coming of social greeks and various other extra-curricular organizations in the late 50s and early 60s, active participation of the fraternity declined. With the new variety of activities in which students could participate, those students who were members had less time to devote to fraternity matters. Futhermore,the new spectrum of activities drew away prospective members as well. By the middle of the turbulent decade of the 1960s the fraternity remained in the name only and by the middle of the 1970s, the chapter's charter was revoked.

In 1987, the Omicron Chapter was reactivated on the campus of Shippensburg University. The National Secretary-Treasurer, Mr. Steven DiGuiseppe, initiated approximately 250 new brothers. Fellow brothers from the Sigma (Millersville University) and Iota (Bloomsburg University) chapters also took an active part in the initiation. Officers were elected for the upcoming school year along with the appointment of Dr. Jeffrey Lacy of the Chemistry Department serving as faculty advisor. 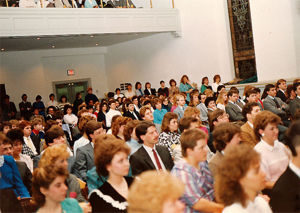 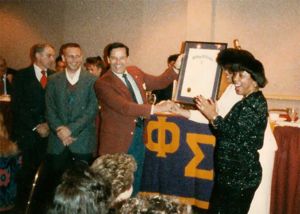 The fall semester of 1987 started out as a very busy one for Omicron Chapter. Regularly scheduled meetings of the general membership were held so that everyone would be able to keep in touch with fraternal matters.

The fraternity ran smoothly for the next decade, as membership continued to grow and the current members gained more experience on what it takes to balance scholarship, leadership, and fellowship and other fraternal matters. In fall of 1997, the first website for Omicron Chapter was created by Keith Ensminger. Then in 1998 under the presidency of Mark Schmelz, the chapter decided to start allowing second semester freshman the opportunity to pledge.

During the next few years, the chapter had ambitions to host a large fund raiser event. In the spring of 2003, Omicron held its first annual fund raiser event and held a Dance-a-thon that raised money for the A-T Children's Project. After the success of this event, the chapter decided to combine the fund raising event make it an inter-chapter event as well. Thus, in spring of 2004 under the presidency of Erin Golembiewski, Omicron Chapter held its first annual Inter-Chapter fund raiser event. Chapters from around Pennsylvania and students from campus participated in a Jello-wrestling match to raise funds for the Association of Retarded Citizens (ARC). Over $3,000 was raised for the ARC and good times were had by all who participated, making Jello-Wrestling at Omicron a popular event. In the fall of same year, Anthony F. Ceddia, the then president of Shippensburg University, was inducted as an honorary member of Phi Sigma Pi.

Within the next couple of years, the chapter continued to be an active organization in Shippensburg University while Omicron continued as one of the active chapters. In spring 2005, all the hard work was paid when Omicron was awarded with Joseph Torchia Outstanding Chapter Award and the Top in Region Award. Within the next two years, the chapter again proved to be one of the outstanding chapters in the Keystone Region and was awarded with Outstanding Risk Management Award at National Convention held in the summer of 2007. In 2010 Omicron was awarded Top Chapter in the Region and Sanders P. McComsey Most Improved Old Chapter Award. Omicron is working hard to keep improving the chapter to create a great name for the Phi Sigma Pi Fraternity. 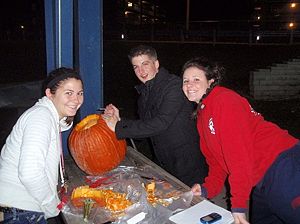 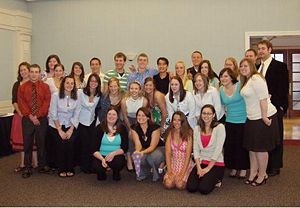 Omicron celebrates the Chapter's founding every year in April by hosting Founder's Day Banquet. The event includes dinner with Alumni. Special recognition is given to brothers or alumni who have contributed immensely.

Every semester Omicron organizes a numbers of events and participates in numerous activities. Some of the recent events are as follows: 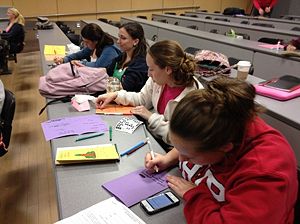 This event was a combination of services that was put together in order to get the most out of our night. Overall this was a successful event. Our chapter gave enough supplies to fill two full schoolbags for our national philanthropy, three full boxes for our military overseas, and a number of cards for sick children and their families.

Our fundraiser for several semesters. Brother's sell candles to their families and friends.

A great fundraiser to participate in because not only do we raise money for our Chapter but we also get to eat delicious food and icecream. As well as spend time with our fellow Brothers which is also a plus!

Omicron organized another successful 5k run for St. Jude’s Children’s Hospital. The event had many people in attendance and raised $1,000 dollars. Along with our chapter two other chapters came to support the cause. 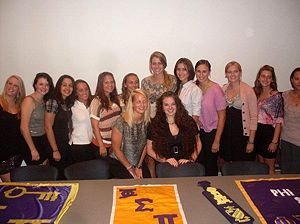 Brothers spend their time by cleaning the house, bed rooms and play areas and just by playing with children. Omicron has been organizing this event every semester.

There are four buildings on campus named after Brothers;

Chapter Alumni Hall of Fame (as voted upon by active brothers)