The Outburst Family is part of the Epsilon Delta Chapter at the University of South Florida.

The Outburst family tree can be found here!

The Outburst Family is the largest, over triple the size of any other family.

One of the Charter members of our chapter, Ashley Nichols, established the Outburst family. The Outburst family has continued to grow over the past few years and today is one of the largest families. The Outbursts are known for their leadership in the fraternity. Almost every executive board position has been held by an Outburst.

The Outburst Family got their name in Spring of 2004 when Ashley Nichols took Amy Wehle as a little. The two discussed the name for several weeks and one evening on the phone, both Ashley and Amy said outburst at the same time. The thought was derived from Ashley and Amy's habit of bursting out in song for little apparent reason at any random place or time. The family number comes from Ashley's Lucky Number 10, and the panda, the family animal, is a secret that only Ashley knows.

It was the tradition when the family was founded that the Jersey's for the guys and girls be distinctive. The girls had white Jerseys with purple, while the guys had the black jerseys. Today, the girls added purple as an alternative to white.

Every Big Brother passes down their membership pin to their Little Brother at the Induction Ceremony. Ashley Nichols had the original pin of the Outburst family. She passed it down to her first Little, Amy Wehle. Amy had twins, so she took the family pin and another one and randomly gave them to Marissa Zwald and Ryan Goldstein. The family pin has continued to be passed down through the family. Today, either Tara Hodgman or Kim Pham have the original Outburst family pin.

It has long been a tradition for the Outbursts to get together for dinner before chapter meetings. They meet at 7:30 at a restaurant near campus. Some of their favorites include Panera Bread and Tijuana Flats. 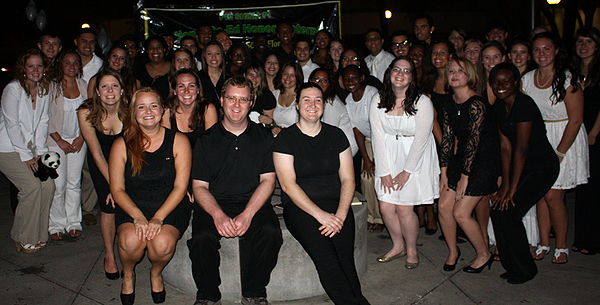