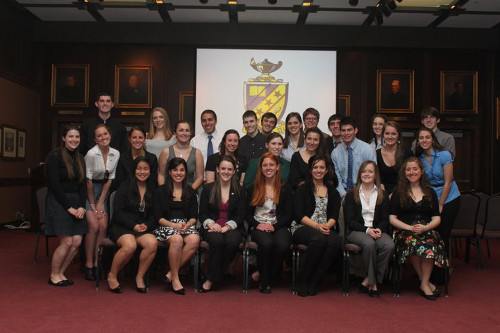 The Charter Class is an initiate class of Zeta Iota at Saint Joseph's University. The Charter Class started with 26 brothers but ended up with 23 brothers who became alumni. Two brothers were expelled and one brother resigned. The Charters are responsible for starting the fraternity. They laid the groundwork for what the fraternity has become. They are responsible for making it a fun, stable, and structured organization that it is now.

The Social Committee decided that it would be a great idea to celebrate “Pi Day,” a special holiday commemorating the famous mathematical constant Pi (π). The initiates who participated in the event enjoyed feasting on pizza pies, conversing with one another and reconnecting, especially since this event took place right after our Spring break. Initiates also had the opportunity to participate in engaging interview sessions with one another, bonding while also having the chance to complete necessary interviews in a relaxed atmosphere.

For our fundraising event, the colony decided to host a 50/50 raffle to raise funds. Several members of the Colony have had prior experience running a 50/50 raffle and recommended holding one as it would be an easy and effective way to raise funds. Tickets were sold in three ways: $3 for an arm’s length worth of tickets, $5 for a wingspan worth of tickets, and four tickets for $1. The winner would receive half of the total earnings while the colony would keep the remaining half. Prior to the event, several members met and designed a banner. During this banner making gathering, members got to better acquaint themselves with their future brothers. Members had a fun time decorating the barren yellow banner with glitter and shimmering shamrocks. On the day of the fundraiser, three of us sat at the main table by the Campion Dining Hall, while others went to the Campion Food Court to sell tickets to students. In the end, we earned a grand total of $53. $27.50 went to our winner, and the remaining $27.50 was saved for our colony. We were competing with a more well-known organization that was running the exact same raffle at the exact same time as we were. Thus arose the problem of being perceived as unoriginal.

Two members volunteered their vehicles, and a total of ten initiates went to Playhouse Lanes. We split into two groups of five and bowled right next to each other, completing a total of two games. Members had a great time cheering on their fellow brothers-to-be, even if they got a gutter ball! Especially whenever one got a strike or spear, shouts of enthusiasm echoed throughout the bowling alley, exhibiting to all our vivacity and spirit. Furthermore, whenever a song came up on the loudspeakers, initiates excitedly danced to the lively music. Though we thoroughly enjoyed this event, attendance was limited because of the lack of available vehicles. Prior to planning this event, we had not been aware that we needed to reserve vans two weeks in advance in order to use the university’s vehicles. As not many of us have cars on campus, we were only able to get two cars on the night that we needed them. Consequently, only ten of us had a means of getting to the bowling alley, which was located a significant distance from our campus.

For our second fundraising event, the colony decided to host another 50/50 raffle to raise funds. We decided to do the event again as it went pretty well the first time around. Tickets were sold in three ways: $3 for an arm’s length worth of tickets, $5 for a wingspan worth of tickets, or four tickets for $1. The winner would receive half of the total earnings while the colony would keep the other half. We had a larger member turnout the second time around for this raffle. As three of us sat at the table to sell to students passing by the Campion Dining Hall, other initiates went out to the Campion Food Court to sell tickets to students who were socializing and eating. In the end, we earned a grand total of $32. Outside interest in this 50/50 raffle was pretty low, and it was difficult trying to convince a significant number of students to buy tickets and support our colony.

The Scholarship Committee thought that it would be beneficial to provide the other members of our colony with an introduction to the Appalachian Experience. Furthermore, we thought it was important to raise an awareness of the poverty and circumstances that affect the Appalachian region. The two presenters at this event had gone to the same location for Appalachia and talked about their different perspectives while offering a visual presentation of their experiences. Of the two presenters, one had been on several trips before and was able to give accounts of other sites to which she has been. The presenters talked for about a half hour and allowed for questions at the end. It would have been advantageous to have more speakers talk about their experience at Appalachia. Having more speakers share their stories and experiences would have allowed for a greater and more diverse sense of what makes the Appalachian Experience a unique and special one. Beth and Kathleen gave speeches

Our colony wanted to plan a social event that would allow everyone to 1) gather and acquaint with each other, 2) share a meal that promoted fellowship and 3) expose us to a variety of cuisines we do not ordinarily enjoy. We all met at the Overbrook Train Station a few blocks down from Saint Joseph’s University and took the train into the city. We then arrived at the restaurant and were immediately seated by the waiter at a unique table built into the ground that really exuded the cultural feel of Japan. Not knowing what to order, everyone ordered a different dish, including Yasai Tempura, Pork Shogayaki, Tekkadon, and Dragon Rolls. Going to Nara really allowed everyone to get a feel for unfamiliar cuisines and also enabled initiates to talk and get to know each other in a fun setting with food. The restaurant also played great music and our group proceeded to sing along and dance, making our waiters chuckle in delight. Overall, the trip was very successful: everyone had a terrific time and we are all looking forward to heading back to Nara in the future! There was a misunderstanding regarding the train departure time at Overbrook station, and as a result, participants ended up waiting over half an hour for the next train.

Brothers volunteered their time at the Arc of Philadelphia. Brothers served food and danced with the mentally disabled. It was a great event that allowed the brotherhood to give back to the community.

The Scholarship Committee saw that there was going to be a discussion on campus dealing with the Federal and State Prison and Justice System, a topic about which many of us are ignorant. In addition to gaining valuable insight into the prison/judicial system, it also gave us an opportunity to experience a large discussion/debate about a very important but sensitive issue. Speakers and professionals from the Pennsylvania Prison Society led the debate about what people believed was the goal of the correctional system and whether that goal was being pursued in the proper ways, let alone being accomplished. There were ex-offenders who offered their opinions regarding whether the system was working and what they thought would make the system better. There were also many people from within the community who raised their concerns about the system and their concerns for the safety of the commonwealth. Additionally, professionals from within various areas of the criminal justice system offered their thoughts on the system based on their experiences with offenders and the overall correctional system. The discussion was a successful event which offered great insight into the judicial system and helped us learn how to participate within a forum setting. There were approximately 300 students, professors, professors, and citizens taking part in the discussion about the shortfalls of the federal and state prison systems.

The social committee planned an official baking night to be held in Wynnewood Hall. Initiates brought various baking supplies and ingredients, including pans, bowls, oil, vanilla frosting, chocolate frosting, eggs, cupcake mix and brownie mix. We played music while preparing the baked goods and had a fun time talking to each other and making a mess (not all of us are gifted bakers)! By the end of the night, we were stuffed with sweet goodness. Baking sessions in the future would be more successful if they were held over the weekend. Having the baking get together on a week night was not the smartest idea, especially since many of us had homework and tests the very next day. Also, we baked much more than all of us could eat, so we had to worry about who would take home the extra baked goods

Every year Saint Joseph’s University hosts “Fun Day,” an event that invites local elementary school students to our campus for the afternoon to participate in an array of fun activities. Our colony decided to exhibit our support for this event by volunteering as a group. We chose to set up a booth that would include fun arts and crafts activities corresponding with the “Under the Sea” theme. Half of our group decided to spilt responsibilities evenly: one group would walk around with little kids to the different booths, and the other group would work at the station we sponsor. We bought a variety of coloring books, construction paper, makers and crayons and looked forward to meeting the school children and spending a fun afternoon with them. Unfortunately, the day of the event was postponed to April 29 due to inclement weather. Members were saddened that we would have to wait to take part in “Fun Day.” However, we gathered together as a group and brought in all our arts and crafts supplies. We proceeded to decorate our booth and took great pleasure in utilizing our creative and artistic skills while talking to one another about our weekends. Even though the postponement of Fun Day was out of our control, we are happy that we had the opportunity to gather and prepare for this worthwhile event. We are donated all of our extra supplies to the Fun Day committee.

Students from every discipline who have completed exemplary class projects, independent research, or departmental and University honors projects will be given the opportunity to display the product of their efforts in a variety of formats to faculty, parents and friends. There were several Brothers who attended this presentation and learned a great deal about their peers academic achievements. There were also Brothers who participated in the event. They had present on an easel and 4’x4’ backboard. The Brothers attached their project to the backboard for display.

The charter class held a lunch during free period at the Campion Food Court. The charter class got to meet each other better. The social committee planned the event. During the lunch, Initiates interviewed each other with pre-planned questions. There were several of these lunches throughout the semester.