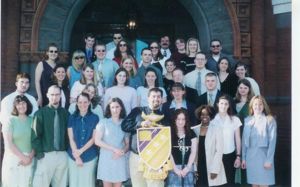 Brian decided to attend Millersville University in 1998 after transferring from York College of Pennsylvania and rehabilitating from a head injury caused by a motor vehicle accident in 1996. After making the dean's list every semester since he started at Millersville, he received his invitation to rush Sigma Chapter of Phi Sigma Pi National Honor Fraternity in February of 2000. He felt really good about himself when he received the letter from Sigma. In just a little over 3 years, he had gone from being told he would not make it through the night in the hospital to being inducted into an organization that recruited the best and brightest students at Millersville. Brian was inducted into Sigma Chapter on April 1, 2000. This was the start of a lifelong membership.

Brian served as the Phired Up Initiate Class President, Program/PR co-chair, and Recording Secretary during the two years that he was an Active member of Sigma Chapter. In addition, Brian was honored to represent Sigma Chapter as its Grand Chapter delegate in 2002. Brian would like to think he was known in Sigma as someone who could always put a smile on your face and could be counted on to lend a hand where needed. He really enjoyed and participated in the multiple service projects that were sponsored by Sigma Chapter, including cleaning the Meals on Wheels kitchen, serving at a pancake breakfast, and clearing a stretch of road with Adopt a Highway. During his time as an active member at Sigma, Brian had two littles, Beth Nicole Wargo and Angela Dadario.

Since graduating from Millersville in 2002 and entering the field of Student Affairs in Higher Education, Brian wanted to give back to the Fraternity that helped shape the best 4 years of his life and introduced him to some wonderful people. While working as a Residence Hall Coordinator at Eastern Kentucky University, Brian contacted the Director of Expansion, Colleen Donathan, to start a chapter at EKU. After a year long colonization period, Epsilon Eta Chapter was founded on April 25, 2006. 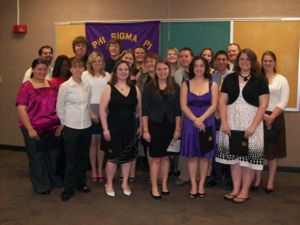 After leaving EKU, Brian began working at East Tennessee State University. One of the first things he did was contact National Office about starting another chapter. On April 21, 2008, Epsilon Xi Chapter was founded. Brian hopes to start more chapters of the fraternity at additional institutions that he works at over the years. Brian serves as both the Alumni and Faculty Advisor for the Epsilon Xi Chapter.

Brian hopes to one day serve on National Council.