Dr. Richard Cecil Todd (29 Dec 1914 - 18 July 1993) was an Alumni Member of Sigma Chapter (Σ 58) at Millersville University of Pennsylvania and an Alumni Member of Tau Chapter (T 878) at East Carolina University. Along with Joseph Torchia, Dr. Todd is best known for guiding the National Fraternity through a period of growth and expansion in the 1950's and 1960's.

Todd was a student at Millersville, where he became a Member of Sigma Chapter in 1936 and graduated in 1938. He pursued graduate studies at Duke University, receiving a PhD in History in 1950.

Upon completing his graduate studies, Dr. Todd took a position as a professor of history at East Carolina University, where he served for 27 years before retiring in 1977. Professor Todd was also director of the History Honors Program for 14 years. Todd was widely regarded by both students and colleagues as an outstanding history professor. In addition to being involved with other on-campus organizations, Dr. Todd served as Tau Chapter Faculty Advisor for many years. In 1977, Dr. Todd became one of the first faculty members at East Carolina University to be inducted by the Honor Society of Phi Kappa Phi.

Over a period of twenty-five years, he served in the offices of National President, Vice President, Counselor, Historian, and Alumni Representative. 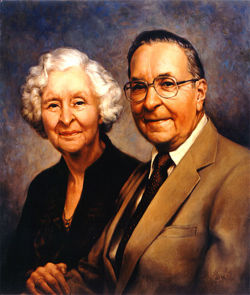 Dr. and Mrs. Todd established the "Todd Tripod Scholarship" in 1991 to promote the future academic opportunity of Phi Sigma Pi brothers who have excelled in embodying the ideals of scholarship, leadership, and fellowship.

Dr. and Mrs. Todd established the "Todd Scholarship" in 1969 to promote the future academic opportunity of Tau Chapter Brothers of Phi Sigma Pi who have excelled in embodying the ideals of scholarship, leadership, and fellowship. It is now given to all members of Tau Chapter's Executive Council.

This scholarship is open to students of East Carolina University and was established in 1974.

Dr. and Mrs. Todd established the "Outstanding Basketball Players" at Millersville University in 1970. Dr. Todd played basketball for Millersville and wanted to provide finaicial assistance to these student athletes.

On August 24, 1994 Todd Dining Hall opened its doors to students for the first time. This facility is located on College Hill Drive and can seat 625 people in the main dining room and 125 more people in a private dining room, which is know as Sweetheart's. Sweetheart's is a restaurant style facility with a host and waiters. Sweetheart's features a full buffet, four different salads, a selection of hot and cold sandwiches, deserts, and a soup and salad bar. Sweetheart's is also decorated to create a more relaxing atmosphere.

The building was designed along with the original university architectural style and has red clay tiled roof, arched windows, and elaborate archways. Inside it has a full service kitchen and bakery. The building was paid for by proceeds from ECU Dining Services, a self-supported operation. This is also the first major building to receive its name before completion of construction.