Tim decided to attend Temple University because of the school's Pharmacy program. After joining Temple's Diamond Marching Band and performing for the football and basketball teams, Tim knew he would not be in band forever and wanted to meet more people. He decided to rush Phi Sigma Pi because he knew several of the brothers already and they spoke highly of the fraternity. After going through the initiation process as a member of the Alpha Xi class and serving as Alpha Xi's secretary, he really enjoyed being in the fraternity and wanted to become more involved.

Once a Brother, Tim became involved with the ICR Committee and helped with Philly Cup. Tim served as the Historian for the 2009 year. In Spring 2010, he served as the ICR Chair. As the Chair, he helped to plan a new impromptu ICR at a Phillies game with several other people in the Chapter. The event had over 50 out of Chapter Brothers attend. In Spring 2011, he served as Co ICR Chair with Julie Carr and helped to plan the Phillies game again.

One of Tim's favorite moments as an Active Brother was being at National Convention when Alpha Lambda received the Torchia.

Unexpectedly Tim became an Alumnus due to being accepted into Temple University's School of Pharmacy, PharmD. program. Currently, Tim is a member of the Delaware Valley Alumni Chapter and a member of the National Alumni Association. As of 11/11, Tim is one of the Alumni Advisers for the Alpha Lambda Chapter

Tim is a member of the AT Family. 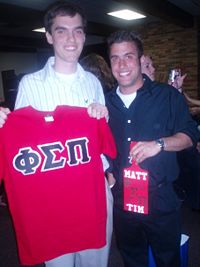 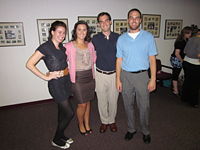 Tim's cousin is a Brother at the Iota Chapter and share the same family colors.