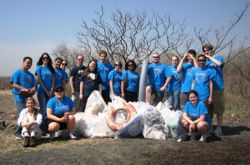 Brothers at the East Region Conference 2008

Scholarship and Service In Philadelphia, SSIP, was the former name of the East Region Conference. There were three SSIP conferences from 2003-2005. The conference name intentionally did not reference the word social to highlight the two other legs of the tripod, Scholarship and Leadership (service). The conferences were held in Philadelphia since it was a convenient meeting place. With the reactivation of Alpha Theta and two East Region chapters in northern New Jersey the conferences started moving beyond the city.

Hosted by Alpha Iota, Montclair, NJ (April 13 - 15, 2007) This was the first East Region Conference held in New Jersey. Although no official attendance was taken, about 7 to 10 Brothers representing the Alpha Theta Chapter in New Jersey and various chapters in the Philadelphia region were in attendance. This particular conference took advantage of Montclair State University's proximity to New York City, with a NYC Landmark Scavenger Hunt as a scholarship event and attendance at a Times Square Comedy Club as a fellowship event. The Region also planned a multicultural potluck dinner and ice skating event on campus as well.

Due to complications with the New York City Parks Department, the region's planned Central Park clean-up event was canceled.

Host: Epsilon Alpha Chapter at Kutztown University. Theme: Disney ("I'll Make a Bro Out of You")

In recent history, the East Region Conference tried to reflect the Tripod as much as possible through scholarship, leadership (through service), and fellowship programming. A welcome addition to the 2008 East Region Conference was the establishment of discussion roundtables, which served as an opportunity for Brothers to discuss issues and problems in broad topic areas such as scholarship, recruitment, and initiation, so that Chapters can return that information back to their respective Chapters.