Alpha Pi Chapter (Founded 6 October 1991) is located at Pennsylvania State University in University Park, Pennsylvania. The Chapter was founded by Chapter alumnus Name and is a member of the Central Pennsylvania Region.

The Alpha Pi Chapter of Phi Sigma Pi was founded on October 6, 1991 upon the ratification of the constitution. The first executive board consisted of President: Angela Evans, Vice President: Richard Griffiths, Treasurer: Alicia Sweitzer, Secretary: Gwyn Johnston, Historians: Valerie Holmes and Alison Carroll, Initiate Chairperson: Marc Marino and Parliamentarian: Morgan Janier. Upon its founding in October of '91 Phi Sigma Pi was still not approved as an official organization of the Pennsylvania State University. Thus, they were unable to hold any meetings on campus or participate in campus events under the name of Phi Sigma Pi. Due to their underground status many brothers refused to say the name of the fraternity aloud, even in the presence of other brothers. It was not until November 3, 1991 that President Angela Evans announced to her committee that they were officially recognized.

In the first class in 1991 there were 134 inductees, with 3 females to every one male. 55% of the brothers were education majors, 12% were business majors, and 33% were other majors. The first event held by the Alpha Pi chapter was a hayride at Mount Nittany Trail Riders on October 27th. Sixty brothers attended. Brothers spent much of their time holding events in the hopes of getting to know one another better. Some events held by the chapter included ice breakers, informal dinners, food drives, face painting before football games, the Penn State Dance Marathon and the American Heart Association Heartwalk. In an effort to better develop the brotherhood, brothers also developed programs and policies such as an initiation program and an attendance policy within its first years of existence.

There are 12 committees within Alpha Pi: Service, Fundraising, Scholarship, Recruitment, Public Relations, Webmaster, Risk Management, Homecoming, THON (Penn State's Dance MaraTHON), Social/Intramural Sports, Alumni, and Relay for Life. The Prism is the Chapter's newsletter that is sent out to the alumni every semester.

Alpha Pi participates in Penn State's Homecoming festivities every year. The brothers join together and spend hours building and pomping their float as well as taking part in the "Homecoming Day of Service" 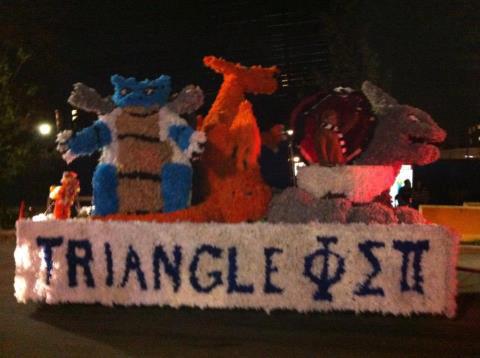 Every year, Phi Sigma Pi participates in the Penn State IFC/Panhellenic Dance Marathon, affectionately referred to as THON by the students at Penn State. THON is best described as a year-long fundraising effort that benefits children and their families in their fight against pediatric cancer. Phi Sigma Pi is engaged in a friendly competition with more than 375 other student organizations to see who can raise the most money for THON. Our combined efforts culminate each year in February with an amazing two-day, no sitting, and no sleeping dance marathon. 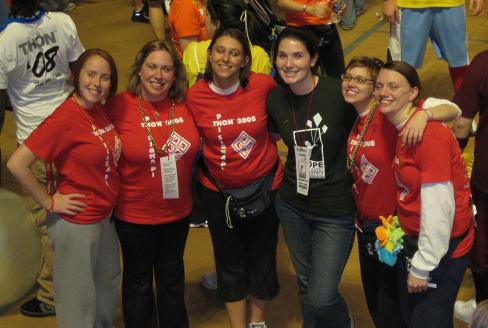 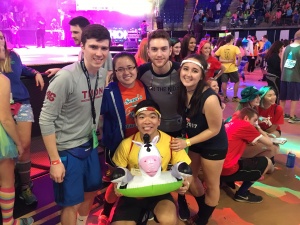 This photo was taken at THON in 2008. These Brothers were dancers or committee members for THON. From Left to Right: Emily Friedlander, Krysten Scheidler, Marissa Gernett, Sarah Booth, Emily Spivak, Amy Dobner.

Prior to 2017 Alpha Pi holds an annual philanthropy called Brother Bowl. Brother Bowl is an ICR, Alumni, and Fundraising event bringing chapters to Penn State for a day of friendly competition and fun on campus. A benefit concert is held in the evening and has benefited a few different philanthropies in recent years, including Teach for America and the Make a Wish Foundation. The event is coordinated each year by the chapter's Corresponding Secretary.

Brother Bowl was created with the help of Patrick MacFarlene (aka PatMac) in 2001 during his term as Corresponding Secretary. The event developed originally from Alpha Pi's Win, Lose, or Draw Tournament that was also a philanthropy and alumni event. When the Win, Lose, or Draw Tournament became an interchapter event the name was changed to Brother Bowl. The first Brother Bowl event involved a "double dare" event and a scavenger hunt followed by a graffiti pary. Excatly 100 brothers attended making it the 3rd largest interchapter event in its first year of existence. The event raised between $500 and $1000.

2017- With the removal of Regions, and the subsequent removal of the ICR Position, Brother Bowl has since been organized by the chapter's Vice President. The event is now an intra-chapter event, that includes an Alumni team if Alumni was present, and each event is run by a member of the committee of Chairs.