Gamma Pi Chapter (Founded 18 March 1997) is located at Towson University in Towson, Maryland. The Chapter was founded by Sharon D. Lilly, Alumna of Alpha Beta Chapter. It is a member of the Capital Region.

The Gamma Pi Chapter at Towson University was founded on March 18, 1997 by Sharon D. Lilly.

Gamma Pi Chapter started off with a large founding class while the charter class consisted of only two Brothers. The Chapter continued to grow, inducting nine Brothers the following semester in the Alpha class.

The current Alumni Advisory Board for Fall 2016 to Spring 2017: Alex Andre, Hayley Ressler, and Janelle Hartman.

There are currently six active families in the Gamma Pi Chapter.

Gamma Pi celebrates their Founder's Day every spring with a formal banquet.

Gamma Pi's philanthropy has evolved over time to meet the needs of the chapter. Originally, Gamma Pi held a benefit concert every fall called "Dance for Breath for Cystic Fibrosis" which benefited the Cystic Fibrosis Foundation. When the chapter changed its philanthropy to fighting lupus, the concert name was changed to "Band Together against Lupus" benefiting the Lupus Foundation of America. In 2008 the annual concert was changed to a comedy night called "Laugh out Lupus." Periodically the event fluctuates between the Fall and Spring semesters depending upon when the event will be a greater success.

In April 2011, the chapter changed its philanthropy to amyotrophic lateral sclerosis (ALS), which is more commonly known as Lou Gehrig's disease.

Recently in the spring of 2016, the Chapter voted to remove ALS as its primary philanthropy and established a new way of supporting philanthropies. Rather than having just one set Chapter Philanthropy, Gamma Pi would instead hold a vote each year to decide what philanthropy(ies) they would support. By doing so, this keeps the local philanthropy relevant to a majority of the Brothers and also encourages them to work with something they are truly passionate about.

The Gator, which is distributed weekly via e-mail

G-A-M-M-A P-I, Gamma Pi until we die!
We all stand for brotherhood;
Find it; feel it, yes you should;
Towson U is where it's at;
And you can not mess with that! T-U! 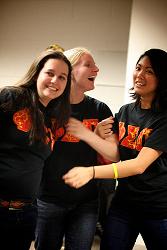 Awards for Chalk the Walk, and Yell Like Hell.